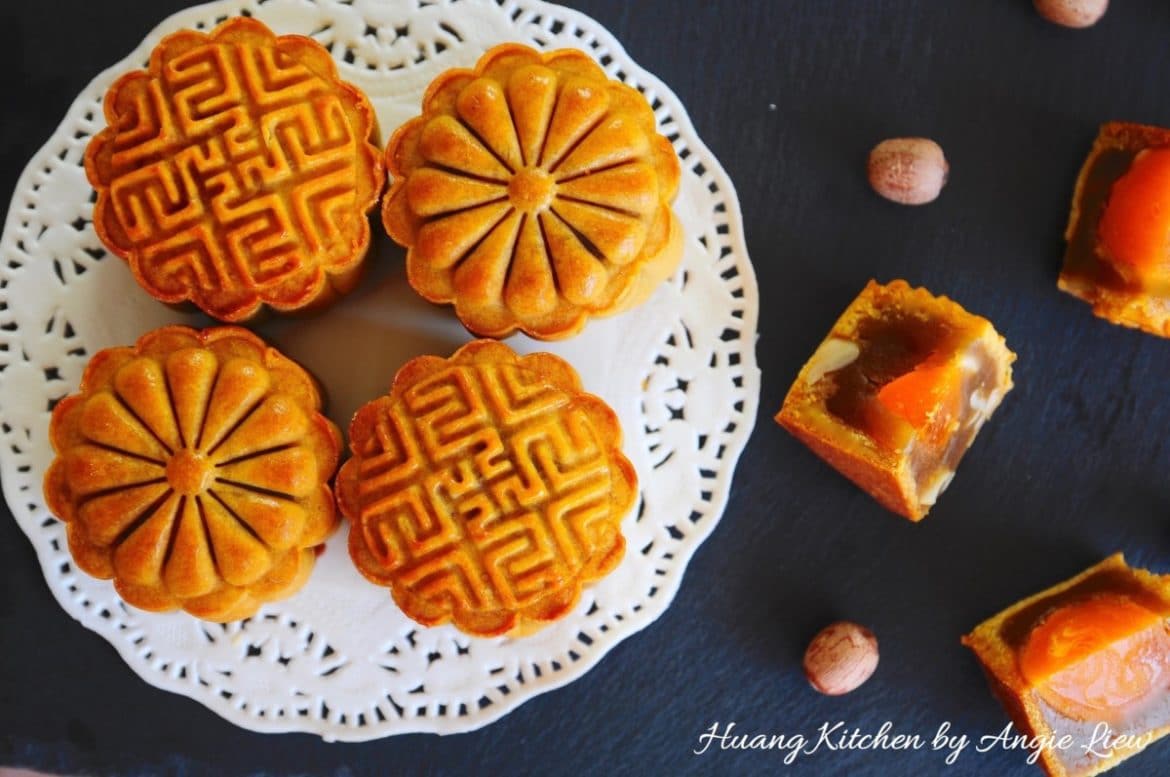 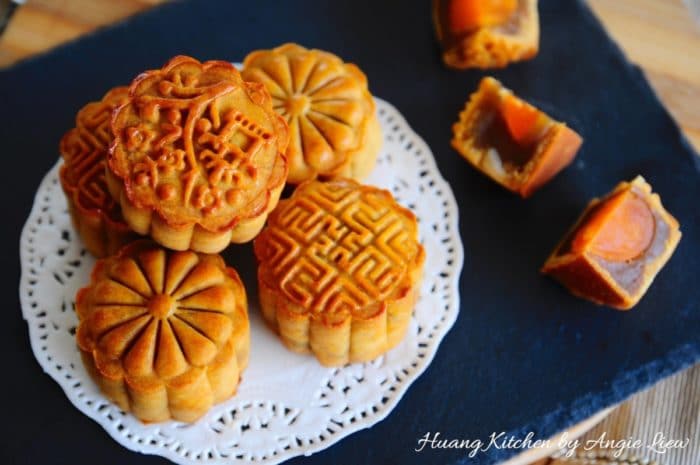 Mid-Autumn Festival is fast approaching and the best way to celebrate the auspicious occasion is to enjoy the day with a good old traditional baked mooncake – one with an egg yolk or egg yolks, of course. The savory salted egg yolk cuts the greasiness and sweetness of the overall mooncake. This combination tastes just heavenly. 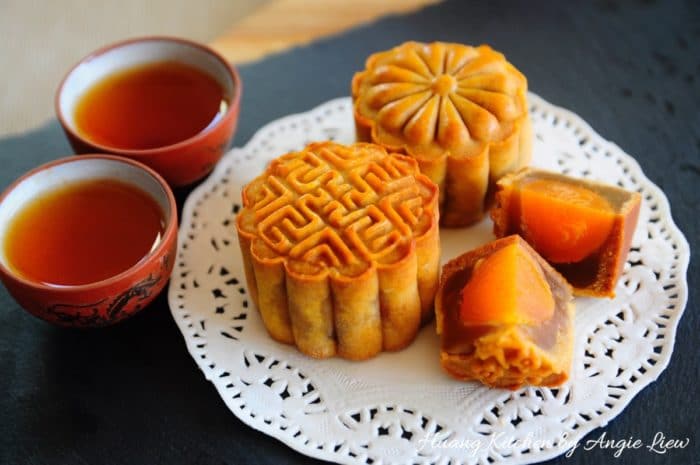 These mooncakes are not at all difficult to make, especially with commercially available lotus seed paste. For those who are more ambitious, try making your own lotus seeds paste. It’ll be worth it, as homemade lotus seeds paste can be really delicious and you can also control the sweetness of the mooncakes to your own liking. And, what’s even better, they are only just a fraction of the cost of those sold commercially. 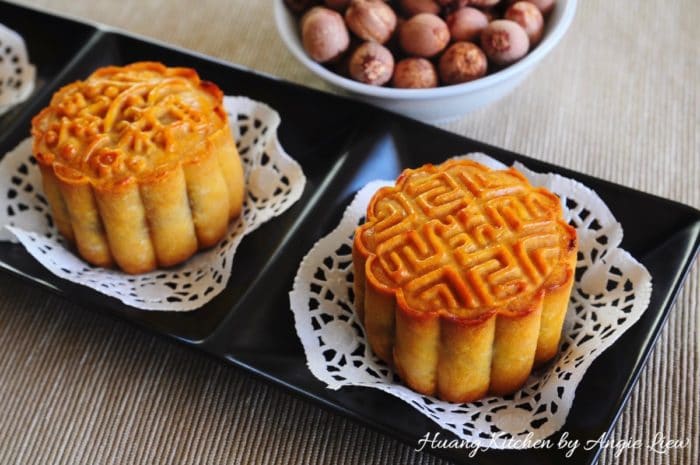 A Miniature Version Of The Traditional Lotus Paste Mooncakes:

For this mooncake recipe, we’ll be using the mini sized mooncake moulds (70g) to make the mooncakes. These mini lotus paste mooncakes looks so wonderful and make great mid-autumn festival gifts as well! Not to mention, these mini mooncakes are definitely popular among the younger ones too. 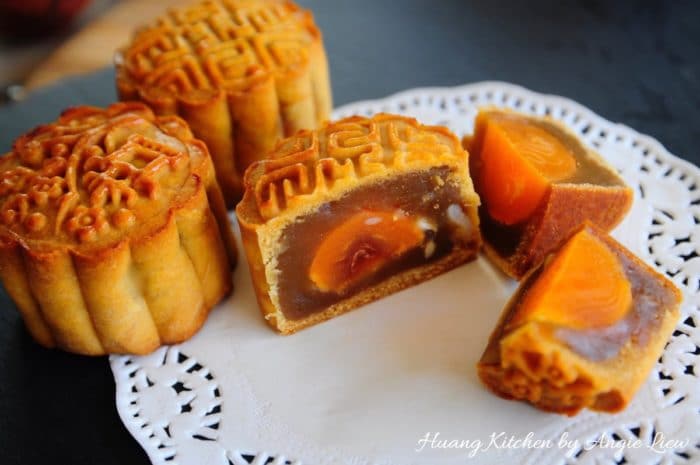 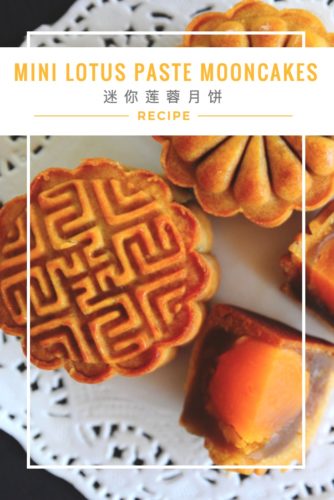 Golden syrup is also known as inverted sugar syrup. It is an amber coloured syrup made from sugar but has a much richer texture and a deep aroma from the citric acid in it. The acid is needed for making the mooncakes. The alkaline water adds a yellow colour to the dough skin. It also acts like a baking soda to keep the dough skin fluffy and moist. It helps to neutralise the acid in the golden syrup so the dough won't taste sour. Making mooncakes requires very accurate measurements so it's best to have in hand a weighing scale to measure all the ingredients needed. When pressing using the mooncake mould, set the tool with one hand and then press it down with the other hand. Do not press it too hard, otherwise the mooncake will squeeze out from the bottom of the mould. Only lightly egg wash the top surfaces of mooncakes and not the vertical surfaces. If you accidentally brush too much egg wash and it fills the pattern, then use a small brush to clean the gaps and remove excess egg wash. Allow baked mooncakes to cool on baking tray before removing them, as the mooncakes will be flaky and soft when hot. If removed them right after baking, the mooncakes may crush easily. These mooncakes should be kept in air tight containers for 1 to 3 days before serving, as the mooncake skin will be very tough and crumbly right after baking. As the mooncakes rest, the oil inside them seeps out and this will allow the crust to soften, be moist and the flavour to develop.
Course: Baking, Desserts, Snacks
Cuisine: Asian, Baking, Chinese
Keyword: Chinese, Mid Autumn Festival Mooncake, Salted Egg Yolk
baked mooncakeChinesemid-autumn festivalmooncakesalted egg yolks
Share FacebookTwitterPinterestWhatsappTelegramLINEEmail
previous post

Hi Angie, can I skip for the alkaline water?

Hi Angie
Tried ur mooncake recipe (sweet potato n mini lotus paste)
I realised the Skin grammage (ur recipe totally 490g) which doesn’t tally to make 22minis when is recommended to use 25g each.

I am not sure of your question. Have you made the mooncakes? The total amount of dough skin should be around 550g for the mini Lotus Paste Mooncakes. You mean you only get 490g? If that’s the case, then you can reduce the no of mooncakes to make. Thanks

Hi Angie, Thank you for sharing this recipe. May I know if the lotus paste recipe is considered as low sugar mooncakes pls? If it is not, can you pls advise how much sugar I should use to make low sugar Lotus paste? Want to make for the old folks. Thank you so much for your advice.

Hi, sorry for the late reply. I would consider my lotus paste as not too sweet. Of course you can still reduce a little (10 grams) but not too much. It needs the sugar to form the paste as well. Thanks

Hi, we allow usage requests for non commercial purpose (with proper credits and image/video watermarks in place). Can we know more about your presentation and assignment before we proceed?

Hi,can I use your recipe as class presentation and assignment? They are too beautiful and I wish to ask for your permission.

Hi Angie…what can I substitute for the maltose?

You can use honey instead. Thanks

Hi, Angie, best recipe for mooncake, one question, can we skip the maltose or change it with other ingredient?

You can substitute with honey.

I’d like to give it a try, although It seems that I cant get any Maltose here.
What would you recommend to replace it with?
Thanks 🙂

You can use honey instead . Thanks

If I used shelled lotus seeds hue many grand do I herd for your recipe. The salted eggs that I usually know are in the shell. Can you buy just the yolks?

Hi Angie,
Love your recipe!
I’d like to give it a try, although It seems that I cant get any Maltose here.
What would you recommend to replace it with?
Thanks 🙂

Hi, I’ve been trying your recipe for the 3rd time! Thank you for sharing this for us. It works well the first time, even for me (first time making mooncake). My family loves it! Thank you again. May I ask how long can I keep this mooncake in room temp before it expired? I mean, I made one batch on last Saturday (19 Sep), but we’re under quarantine now, so I thought to ship these mooncake to my family on Thursday (24 Sep), would that be okay to be eaten?

Hi, great to know that. The mooncakes can only be consumed about 2-3 days after baking. Sp it is still good to go. Nevertheless you can just put in the refrigerator if you need to keep longer and leave to room temperature before you consume. Hope this helps to explain. Thanks

Hey Angie, thanks for sharing your recipe! I was just wondering if I am not adding the salted egg, and the filling is just white lotus paste + melon seeds, what’s the ratio for the mooncake skin and mooncake filling?

Hi, if you are not adding salted egg yolk, you just make sure the weight of Mooncake Skin + lotus paste + melon seeds = the size of mould.The skin of mooncakes need to be thin so you just increase the rest of the filling. Thanks

Hi Angie, thanks for the mooncake recipe! Just want to ask why the egg wash is only to the top of the mooncake only and not the vertical surfaces? Thanks

We egg wash only the top as it gives the mooncake a shiny glaze. Not on the sides as it will give it an uneven shine.